If like me you are interested in family history, you might be a fan of Who Do You Think You Are? and similar programmes. Perhaps you've even signed up to some genealogy websites and started your own family tree.

I am interested in my own family’s history, so I recently wrote an article for our staff magazine at the Intellectual Property Office about a relative who fought and, sadly, died in the First World War. He was my Great Uncle and I have a number of items my grandmother gave to me when I was younger

It was not until I was writing the article that I realised, despite the items being in my possession, that I wasn't certain if I could actually use some or all of them under copyright law? I thought about including a poem, but who wrote it? Not my uncle. I had a number of photos but they had been taken by his comrades, could I use them? Could I use letters/postcards when they were not written by him?

I knew if I wanted to use them in the staff magazine I would need to do a diligent search to find who owned the copyright for these items. I contacted the Bedfordshire Regimental Museum, the Bedfordshire WW1 Archive and The Bedfordshire Regiment Archive. Unfortunately these sources drew a blank, so I still had no idea who took the photos. As for the poem, this was written by another soldier and sent to my great grandmother with my uncle’s personal effects.

In the end I only opted to use photos or items where I knew my family definitely had the copyright. These included the photo below; taken with his mother and sisters a few days before he left for the frontline, within a few months he was reported missing in action in Gaza. 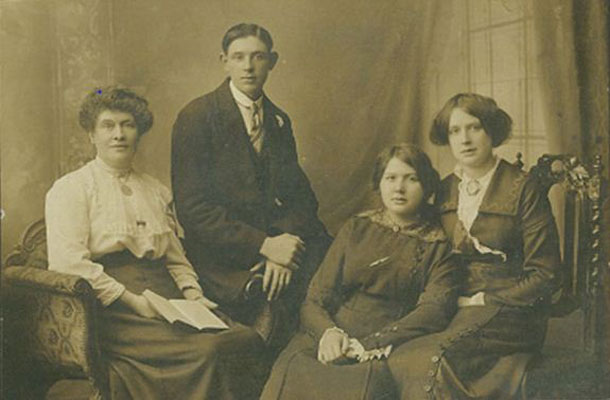 As it turns out, since I had taken such trouble to try and find out who owned the copyright in the other items (the poem, some of the photographs and the correspondence from other people), I could have applied for an orphan works licence from the IPO to reproduce them in the magazine article. I am seriously considering still making an application as the Luton museum are running a project on WW1 and are encouraging people to send in articles, including photographs, paintings, pictures and other memorabilia. Looking through what my grandmother gave me it would be a pity not to share them with a wider audience as I have quite a story to tell, with photos, a letter from the trenches,  an autograph book, a POW post card, poems, medals, identity tags and badges.

What is an orphan work?

Orphan works are creative works or performances that are subject to copyright, just like the poem and the letters I had, where one or more of the right holders is either unknown or cannot be found. A diary written by an ancestor, or even photographs of a family occasion five years ago might be orphan if you cannot find the right holder.  This means you can only do very limited things with the work, and copying them for publication, even among your family, might infringe copyright.

On the 29th October 2014 the IPO launched an online licensing scheme for orphan works. The scheme aims to reunite copyright holders with their works and ensure they are paid for their creations.

The IPO has received applications covering well over 200 individual works; ranging from photos and paintings, to classical and pop music. The majority of the licences are non-commercial (like mine would be) but some are for commercial purposes. Anyone can search the register for further information.

The scheme is relatively simple to use and there is plenty of useful information on our website, including how to carry out a diligent search.